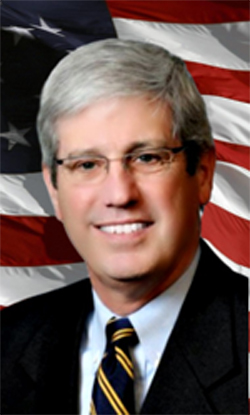 As  Executive Director of the Salina Airport Authority since 1985,

Airways and Steve Fossett's selection of the Salina Regional Airport as mission control and the launch and landing site for the Virgin Atlantic Global Flyer's record setting flights.

In March 2010, Tim was awarded the first-ever Patriot Medal "for providing immeasurable support to the Great Plains Joint Training Center and Kansas National Guard."  Tim is currently a member of the Kansas Governor's Military Affairs Council, which has been charged with optimizing the military presence in Kansas, actively fostering close, effective cooperation among the installations and private and public sectors throughout the state, and pursuing initiatives to enhance the quality of life for all military personnel- active, veteran, and retired.

Tim was honored to receive the American Association of Executives Distinguished Service Award in March of 2012.The Distinguished Service Award is one of AAAE's highest levels of recognition. Men and women receive this award as a reflection of outstanding accomplishments in their professional and personal lives. Respected leaders of their own communities, these men and women also contribute to other aviation organizations, serve AAAE and its chapters and participate in civic and community affairs. DSA winners exemplify the best in airport management by continually bringing credit to the profession and the aviation community. All DSA winners are Accredited Airport Executives and exemplify the standards accreditation seeks to inspire, according to the AAAE website.

Contract Tower Program.  The program has received positive endorsements from all parties involved, including the FAA, NTSB, DOT Inspector General (IG), airport management, Congress and, most importantly, the users of the air traffic control system.

Tim Rogers has been in airport and industrial center management for over 30 years. He obtained a bachelor's degree from the University of Kansas.  Tim was designated an Accredited Airport Executive with the completion of an accreditation process administered by the American Association of Airport Executives.

The Salina Regional Airport is home to 17 commercial aviation businesses that offer a wide array of products and services to local, national and international customers and provides more than 550,000 square feet of available hangar space adjacent to a 12,300-foot runway.  Aviation and aerospace employers are supported by the Kansas State Polytechnic aviation program for workforce training & applied aviation research. He has led the effort to add UAS operations, research and development to the Salina Airport.

transformed from a former military base to a modern, urban industrial center.

Tim's professional and volunteer boards include: