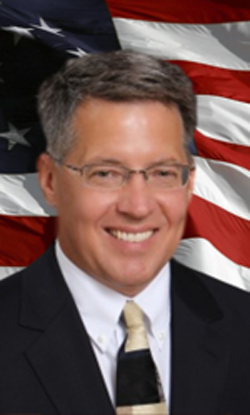 Kent Buer grew up on a farm in Republic County, Kansas. Kent earned a Bachelor of Science degree in Business Finance from Kansas State University in 1985 and started his financial career as a Financial Examiner with the State of Kansas Banking Department that same year. Kent met his best friend, Marcy, in college and they have been married since 1986. He earned a Graduate School of Banking diploma from the University of Wisconsin in 1996 and joined First Bank Kansas in 1999 as Senior Vice President of Lending.Kent where he now serves as President and CEO. Kent serves on the Board of First Bank Kansas and also Advantage Trust Company, a wholly-owned subsidiary of First Bank Kansas. Kent is also on the Board of the Salina Airport Authority and is active in his church, mission work, AMBUCS, Rotary and with his little brother through Big Brothers Big Sisters. Kent sees his primary role at First Bank Kansas as the “keeper of the culture” in shaping and protecting the corporate personality of First Bank Kansas which includes coaching employees to embrace faith, family and community as the utmost importance in work-life balance.